We have kept a range of traditional breeds over the years including Gloucester Old Spots and Saddleback. Currently we have a small breeding herd of Kune Kunes and buy in weaners of various breeds to raise for meat, such as Berkshires.

The pigs are part of our rotation and we also use them as ‘gardeners’ on some of the more weedy fields.They spend a maximum of six months on any piece of land before being moved to fresh ground. The pens will not be used again for pigs for several years.

This rotation reduces the incidence of parasites and disease and avoids the need to worm the animals. During the summer months, the pigs have a wallow in their pens and on the hottest days will get a cooling shower.

As well as their organic feed, they eat grass and dig around for roots. They also love apples and other fruits, potatoes, carrots and any overgrown vegetables from the kitchen garden as well as acorns which we gather for them in autumn.

You will find that the pork from a rare breed pig is much tastier than the standard supermarket offering. You may be forgiven for thinking you are eating a different type of meat altogether.

We have a small butchery, so all of our meat is butchered on site.

Kunes are small, rounded pigs that were imported into the UK from New Zealand during the 1990s.They were kept by the Maoris who allowed them to free range around their villages so the pigs were used to living near people.

They are between 24-30 in tall, and come in a range of colours including ginger, black and white. They have a dish-shaped face and many have two tassels called piri piri under their chin. 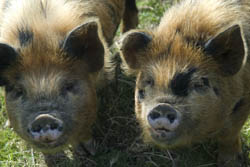 They are incredibly gentle, friendly pigs that can be trained, the ideal first pig for novice pig keepers. Kiri is an 18 month sow and is at the top end of the Kune scale. She has one litter of 7 piglets and we kept the boars for meat. Not only did they mature quickly for a Kune (9 months) but the meat proved to be incredibly tasty and made some brilliant sausages. This was helped by the excellent marbling seen running through the shoulder joints.

Interestingly the butcher noted that the anatomy of the shoulder joint was slightly different from that of our Old Spots. We have two registered Kune gilts that were born in February 2010 and they are at the smaller end of the size scale. Coming from New Zealand, and being small like Hobbits we have named them after the female hobbits Lobelia and Marigold.  They have had one litter each. We kept one of the gilts and they all live together with a retired boar.

They have been responsible for converting a number of people to the delights of the Kune!