The history of Empire Farm

The farmhouse dates back to 1606 and has been extended, rebuilt in part and improved since then.

The farm lies in the parish of Abbas and Temple Combe. Abbas is derived from ‘Abbayes’, meaning ‘of the Abbey’, for it was Shaftesbury Abbey that originally owned one part of the village. ‘Combe’ means ‘valley’, and ‘Temple Combe’ came from ‘Templar’s Combe’, after the Knights Templar led by Serlo Fitz-Odo, who were granted the other half of the village in about 1180AD. The preceptory, or community, of the Knights Templar had revenues at its dis-solution of £107. The remains of their buildings now form part of a farm house in the South of the vllage and the tithe free land in the parish is supposed to have been a portion of the possessions of this order

The village was transformed by the coming of the railway in 1860, and by 1891 more than 80 local people worked for the railway. Templecombe soon became a very busy junction. In the late 1870′s, for instance, some 200 trains a day used the Templecombe spur that linking the the north-south and the east-west main lines, and 10,000 tons of freight was transferred between the lines every month. The map shows Templecombe Station in 1909.

The north-south line, which was dismantled in 1966, forms the western boundary to the farm.

The older houses in the village date from the 17th and 18th centuries, and parish records indicate that parts of The Empire Farm existed then. The building was originally built as a rectory, and records speak of a ‘schoolhouse beside the rectory kitchen’ in 1606. The ‘terrier’ or survey of Temple Combe Rectory is preserved in the Wells Diocesan Registry. It tells of ‘said Rectory or Parsonage belonging one Mansion House or Dwelling House containing in the lower rooms a a hall, a parlour, a chamber (floored with board) and a butterie, and in the upper rooms, three lodging chambers, also a bakehouse (half loafted over), a kitchen unloafted, a schoolhouse under the same roofe half loafted over, also a barn and a stall.’ We are pretty sure that this describes, largely, the current Garden Lodge and the main house’s utility room. The survey also recorded an orchard, two gardens, a hop yard and a square courtyard. The schoolhouse was almost certainly in what is now known as the Coach House.

Interestingly, the survey went on to state that ‘though a mansion, it was certainly not according to our notions luxurious. Only one of the rooms was floored with board. Glass was as yet a scarce article: only, as far as we know, the windows of the hall and parlour were glazed………but the unlofted or half lofted roofs of the kitchen and school house must have made these buildings somewhat draughty and cold in winter’.

There are three date stones in one interior wall of one of the bedrooms of Garden Lodge, indicating when the building as reconstructed or enlarged to accommodate the needs of growing families. The earliest stone is inscribed “HM April 1616″, for Henry Masey was the Rector of Abbas Combe from 1614 to 1633. The second, inscribed “ES 1697″, dates from the time of Elias Sweet, Rector from 1693 to 1717.

We purchased the property in August 2004. Prior to this time it had been operated as a game farm by Jeffery Bennett, raising pheasant for local shoots. Through talking to locals who lived and worked in the property, we understand that there was once a tunnel from the wine cellar all the way to the church at the end of the lane. We have yet to investigate this in detail, but there does seem to be some evidence of an opening having been walled up, and one visitor claims to have played in the tunnel as a boy. Below there are photos of the back of the house showing Garden Lodge and two images of the Coach House (the blue paint being the older image) 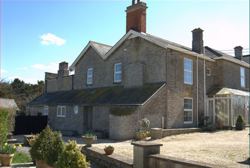 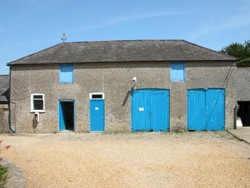 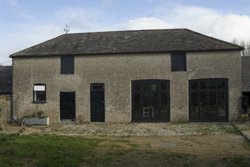 It is our intention to restore many of the former aspects of the property. We have started to re-establishing the orchards, and we will graze our geese and chickens under the apple trees in the traditional manner.

We can do no better than refer to the statement of JC Fox, late Rector of Templecombe, who said of the former occupiers that “they built for others beside themselves. ………. I can say no more than ‘Laus Deo’ for much happiness that the old house has brought to one who has dwelt in it…”.

We intend to maintain, preserve and cherish this wonderful old house, so that it is better when we leave it than when we arrived.