The Empire Farm is a 100-acre Soil Association certified organic farm on the edge of the Blackmore Vale, just south of Wincanton in Somerset. We keep poultry, pigs and a few sheep, and grow fruit and veg. The farm is the venue of our Farm School where we run a wide range of butchery, gardening and smallholder courses. Here you can learn how to set up a micro-holding, become self sufficient in fruit and vegetables, keep pigs and poultry, butcher a pig or lamb, discover the delights of charcuterie or join us for our whole hog weekend.

COVID19 UPDATE: Courses are up and running  (depending on restrictions at the time).  We follow all the guidelines and are confident that we can operate safely and still offer our usual high standards of teaching .
The butchery courses are run by David Coldman and he is the main contact for all matters to do with butchery and charcuterie. Sally organises the smallholding courses. Contact details are given at the bottom of the page. Bookings are made via Eventbrite.

The hands-on butchery day at the Empire Farm is a very popular course and early booking is strongly advised. On this full day course you learn butchering skills so you can deal with your own meat, and take home all the meat you have butchered... [read more]

Two days looking at pork butchery and charcuterie. The starting point for this course is two halves of pig and over the duration of the course your tutor will show you how this meat can be butchered and turned into a wonderful selection of pork products such as bacon, pancetta, ham, coppa, sausage, chorizo, pate and pies, lard and rillettes... [read more]

Introduction to growing fruit and vegetables

This is a new course aimed at people who have started growing veg or taken on an allotment and want to learn more about becoming more self sufficient in fruit and vegetables. ..

Ever wanted to know how to cure and smoke your own meat and fish? Then come along to this one day practical hands-on course to find out how to cure bacon and salmon. You will receive expert guidance on using hot and cold smokers.

This is the perfect course for somebody who only has a small plot of land. You will be surprised how productive you can be - pigs, poultry, fruit and veg, perennial edibles, honey, even fish in this small space.

Can’t find the right course or none of the dates suit? Our bespoke days may be the answer. We can arrange bespoke days on most topics on a date that suits you. Prices depend on the number of people attending and the topic covered. For more details contact the office (01963 371681 / info@empirefarm.co.uk)

Sally writes regularly for Country Smallholding. Her latest articles in 2021 cover fruit growing. Sally has been interviewed by BBC Radio Somerset and Bristol in 2016 and again in 2017. She was a speaker at the Royal Welsh Spring Festival in the Smallholder Centre, Smallholders’ Speakers Corner in 2018 and also at River Cottage Summer Festival.

We were delighted to read that the Guardian named Empire Farm School in the top 5 butchery schools in the country. Our wild meats day was featured in Shooting Times in January 2015 and our butchery courses appeared in the Sunday Times in January 2016. In August 2016 our butchery courses featured in Waitrose Weekend. Further reviews have appeared in Country Smallholding in 2017.  Check out our media mentions here.

The film crew from Countryside Diaries spent a day at Empire Farm filming Paul Martin, Sally and two new smallholders. The programme was broadcast on 1st June 2018. {No longer available on iplayer}

Our livestock housing is made from recycled plastic. Makes fighting red mite so much easier! 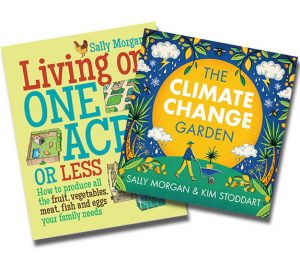 The Healthy Vegetable Garden
and Living on One Acre or less

Sally’s popular books, The Healthy Vegetable Garden  and  Living on one acre or less, cover smallholding and gardening topics.

The Climate Change Garden, was published by Green Rocket Books in 2019.

All these books can be bought at discounted rates on the courses or via  Sally’s other website www.climatechangegarden.uk

Keep up with our news!