The Empire Farm is a 100-acre Soil Association certified organic farm on the edge of the Blackmore Vale, just south of Wincanton in Somerset. We keep poultry, pigs and a few sheep, and grow fruit and veg. The farm is the venue of our Farm School where we run a wide range of butchery and smallholder courses. Here you can learn how to butcher a pig or lamb, discover the delights of charcuterie or join us for our whole hog weekend.
Want to be more self sufficient? You don’t need lots of land as you can grow so much on an acre or less. Find out how you can become more self sufficient by growing a wide range of fruits and vegetables, raise a few pigs and keep poultry.

The butchery courses are run by David Coldman and he is the main contact for all matters to do with butchery and charcuterie. Sally organises the smallholding courses. All course bookings are made via Eventbrite.

The hands-on butchery day at the Empire Farm is a very popular course and early booking is strongly advised. On this full day course you learn butchering skills so you can deal with your own meat, and take home all the meat you have butchered... [read more]

Two days looking at pork butchery and charcuterie. The starting point for this course is two halves of pig and over the duration of the course your tutor will show you how this meat can be butchered and turned into a wonderful selection of pork products such as bacon, pancetta, ham, coppa, sausage, chorizo, pate and pies, lard and rillettes... [read more]

Our smallholder course looks at all aspects of running a holding, from the paperwork to the management of the fields and having healthy soil. The knowledge we impart is based on 25 years of experience as smallholders, keeping pigs, sheep and poultry, and a life time of growing vegetables and fruit!... [read more]

This is a three-hour workshop with Alan Berry of Blackmore Vale Cider, introducing you to the basics of making cider. He demonstrates the whole process including the preparation of the fruit, followed by milling and pressing. Everybody has a chance to join in and help. ... [read more]

This is the perfect course for somebody who only has a small plot of land. You will be surprised how productive you can be - pigs, poultry, fruit and veg, perennial edibles, honey, even fish in this small space.... [read more]

Can’t find the right course or none of the dates suit? Our bespoke days may be the answer. We can arrange bespoke days on most topics on a date that suits you. Prices depend on the number of people attending and the topic covered. For more details contact the office (01963 371681 / info@empirefarm.co.uk)

Sally’s latest book,  The Healthy Vegetable Garden was published in September 2021 by Chelsea Green.  The Climate Change Garden, was published in 2019. She writes regularly for Country Smallholding. Currently she is writing a series on ‘Fruitful Fruits’ and previous series have included soil and quirky crops.

Sally has been interviewed by  BBC Radio Devon on the Toby Buckland Gardening Show in 2022, BBC Radio Somerset and Bristol in 2016 and again in 2017. She was a speaker at the Royal Welsh Spring Festival in the Smallholder Centre, Smallholders’ Speakers Corner in 2018 and she gives talks to local gardening clubs.

We were delighted to read that the Guardian named Empire Farm School in the top 5 butchery schools in the country. Our butchery courses have appeared in The Food Magazine (Feb 2022),  Sunday Times  and Waitrose Weekend Magazine.  Further reviews have appeared in Country Smallholding in 2017.

The film crew from Countryside Diaries spent a day at Empire Farm filming Paul Martin, Sally and two new smallholders. The programme was broadcast on 1st June 2018. {No longer available on iplayer} 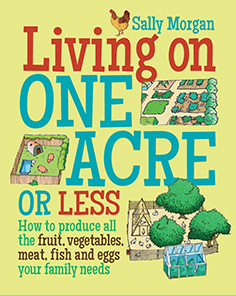 Sally’s popular smallholding book, Living on one acre or less, was published by Green Books in 2016 and a new edition came out in 2021.

Keep up with our news!